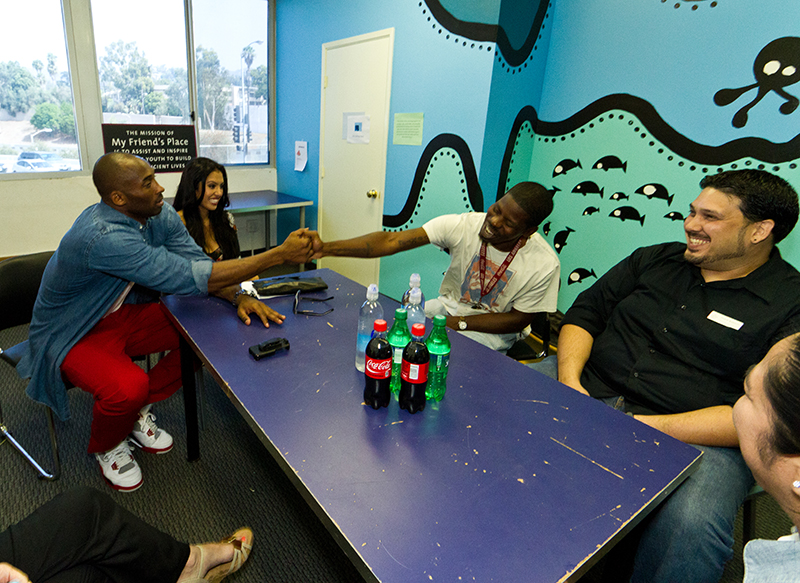 Kobe Bryant announced that the Kobe and Vanessa Bryant Family Foundation has awarded a grant to the organization Step Up On Second to complete construction of eight permanent supportive housing units for homeless youth in Hollywood.

“Los Angeles is the homeless capital of the country, and I am committed to doing what I can to change that statistic,” said Bryant.

The eight youth housing units are part of the new Step Up On Vine building in Hollywood, the latest housing development of Step Up On Second, a local community agency serving over 1,800 individuals affected by mental illness.

“We are incredibly grateful for the support of the Kobe and Vanessa Bryant Family Foundation in completing the construction of the new Step Up On Vine units,” said Tod Lipka, president and CEO of Step Up On Second.

The Kobe and Vanessa Bryant Family Foundation’s newest initiative was unveiled Wednesday as part of an event celebrating the Foundation’s completed renovation of My Friend’s Place, a drop-in center for homeless youth in Hollywood.

The project also attracted corporate partners. The renovation work was completed by Menemsha General Contractors. “It was both an honor and pleasure to work with the Kobe and Vanessa Bryant Family Foundation on the renovation of My Friend’s Place,” said John Daigle, president and CEO of Menemsha. In addition, Panini America provided financial support and Vitamin Water has pledged to supply product donation to the staff and clients of My Friend’s Place for the next year

Los Angeles County Supervisor Zev Yaroslavsky also attended the event in support of Bryant and his Foundation’s efforts to fight homelessness in the region.

KVBFF is dedicated to reaching out to young people and families worldwide to provide financial resources and develop unique programs to make a difference.

Follow Kobe as he tweets about his life on & off the court, and see what is going on at the Foundation.